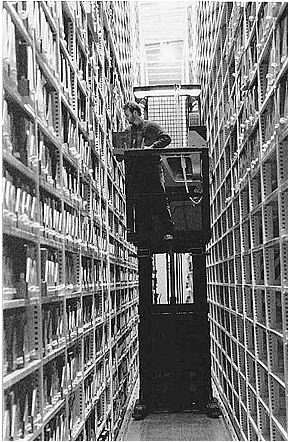 Friends, this History page is likely to be a hodge-podge of miscellaneous links, essays, booklists, and photographs.  The history of the Religious Society of Friends is well-recounted elsewhere, and our focus is the message that Jesus Christ is here, now, with a personal relationship planned out for You to participate in.But there are indeed some lessons to be learned from a thoughtful examination of aspects of our past, and, frankly, some history is just plain interesting.  Look over these links, articles, and photographs when you have a moment.  Consider the past as a useful place to visit, but don't try to live there. Click on the links below to go to the document.

In 1681, William Penn collected on a Â£16,000 debt owed his father by King charles of England, by accepting the charter of a colony in the New World.  Named after Penn's father, Pennsylvania became a model of American government.  The treaty with the Indians, in which Penn legally purchased his grant, has been described as "the only treaty never sworn and never broken."  The Pennsylvania constitution, called The Framework of Government, was drafted by Penn himself, part i England, and part in the colony duing his residency there. Capital punishment was deleted from the penal code except for treason and murder, the minimum acceptable to the British crown. Freedom of religion to all Christians was guarenteed.  Various featurs of the constitution are said to have been incorporated by Thomas Jefferson into the Constitution of the United States over 100 years later.  Read it yourself, and make up your own mind how government and religion can work together in a positive manner.

For a thoughtful examination of a complicated topic, please check out A Short History of Conservative Friends.

In 1912 or so, representatives of the various American Conservative Yearly Meetings got together in Barnesville, Ohio, USA, to worship and to assemble what amounted to a joint statement of faith, entitled A Brief Synopsis of the Principles and Testimonies of the Religious Society of Friends.  Most of those Yearly Meetings are gone now, but the document remains as a testimony of what the Friends of that time thought that Conservative Quakerism was all about.  Most examinations of Wilburite history focus on the various picturesque aspects of the community culture, and ignore the religious beliefs that underlay it. This venerable paper might remind us of some things we have forgotten.

An account of the first meeting for worship in the new Stillwater Meeting House, 1878.  The members  of Ohio Yearly Meeting built the structure in 90 days for $9000.  We ran across this old news item in a scrapbook on a table in the Meeting House itself some time ago.
If you have an interest in the structure of the Meeting House itself, we have posted a number of photographs showing portions seldom seen by visitors.  In particular, there are a number of photographs from the attic, 40 feet above the ground floor benches. Click here to see the album.
A grand gathering of Ohio Friends in the new meetinghouse at Stillwater.  1500 persons listened to the Word. We were given a description of the new meeting house created by the Friends on the site of Stillwater Meeting House, one mile east of Barnesville.  As early as 1810, when Barnesville was laid out by Quaker James Barnes, a number of followers of Fox and Penn had chosen Warren Township as their future home.  In the same year the old meeting house was erected, and here for nearly 70 years the old house stood while its founders mingled with the dust of the surrounding church yard.  Two or three generations have worshipped in the old meeting house, the precious memories which hover around the dear old spot are cherished in thousands of true hearts. 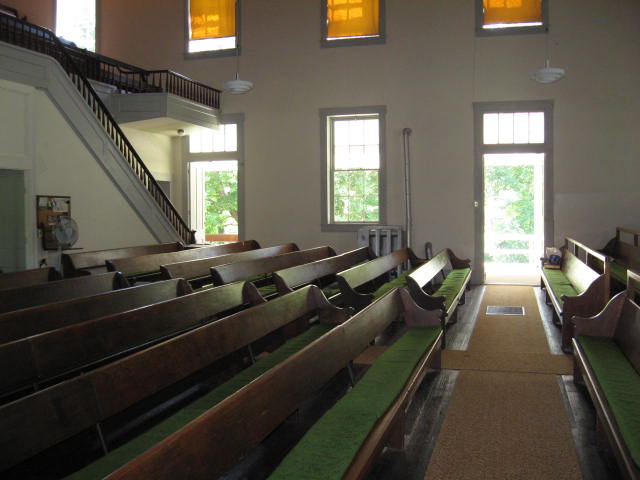 This year the old house disappeared and in its place is another one, somewhat more modern in its construction, but aside from its larger size, preserving the plainness so characteristic of the Quaker character.  The church is situated on a beautiful spot where four roads meet, and on one side is skirted by a line of noble oaks, while down the ridge to the southward the new school raises its front and adds new beauty to the scene.  Nothing could be more beautiful than the landscape that surrounds this church and school--all is in perfect harmony with the peaceful spirit that has its abiding place within the church and in the hearts of its worshippers.

Sunday, or 'First Day' as it is called by the Friends, was an occasion long to be remembered.  As early as nine o'clock the roads were filled with vehicles of every description--the heavy "carry-alls" containing the families of Friends being the most numerous.  These carriages are unique in appearance, and are peculiar to this "peculiar people."  The younger members came in the more modern spring wagons, or in buggies, and these members also, in some instances, discarded the dress worn by the elders. Finally there were members of other churches, and people who never go to any place of worship, but who are always attracted by the novelty of a camp meeting or something out of the ordinary.

The last meeting of the Wilbur Friends held at Mt. Pleasant, provided that the next meeting should be held at Barnesville, and ample provision was made for having an appropriate building erected for its accomodation.  The minutes further provided, that if it was found impracticable to finish the house in time, reasonable notice should be given, and the meeting in that case would be held at Mt. Pleasant.  But as the summer wore away it was apparent that such a notice was unnecessary and owing to the energy of those immediately in charge of the work the last screw was pushed home, the last nail was driven, the floors were swept and the cushions placed on the long forms, late Saturday evening, and the house declared ready for occupancy.

By a careful estimate it is believed the house will hold 1200 comfortably, but its crowded condition Sunday morning and afternoon, when public services were held, leaves no doubt that at least 1500 persons were present.  Every available space was occupied, even the steps leading to the galleries.  The order and quiet maintained by the vast crowd during the day was very remarkable--not a single instance of disorder occurred.

The preacher's gallery faces to the east, and on these benches were grouped the elders of the meeting, aged veterans, with faces worn by time, and moulded by lives of discipline and duty.  On one side of the partition, now raised, sat the men.  On the other side, the women, much more uniform in their dress and manner.  Yearly Meeting is an occasion to be honored, and although the dresses were plain, there was an air of elegance and neatness that was quite noticeable.  Drab was the prevailing color, but it was represented by all the various shades of gray to deep purple.  Bonnets, shawls, dresses, were all of this hue, and when the seats on the women's side were full, that end looked like a garden of shy and modest flowers, all individuality wholly lost, but the effect soothing to the eye, and suggestive of sweetness and purity.  When the mass rose in prayer, or settled in the seats again, it was like the movement of wavelets on a lake--and then the sea of drab became calm again. 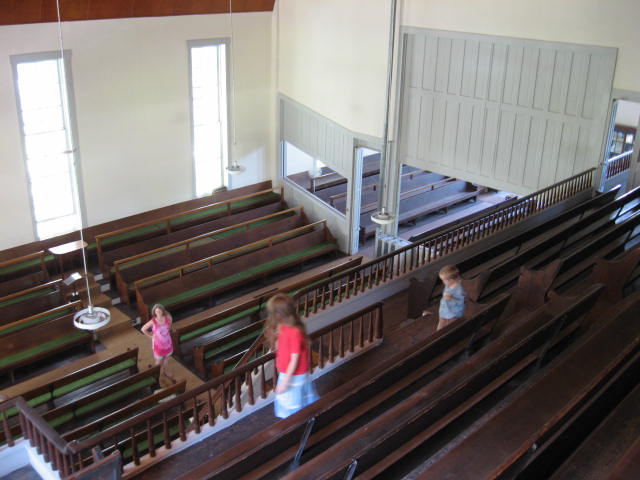 Here and there a flaunting flower of red glowed and burned upon a worldly woman, suggesting a tare in the middle of the wheat.  (It is better always to wear your plainest clothes and harmonize yourself with outward surroundings when you go to a Friends meeting.)

The benches are plain but comfortable, and some good genius has mercifully placed cushions upon them, and a foot rest, so that one can listen, or dream, the hours away, without any fear that an irate and forgotten minister shall reprove him from enjoying the soothing influences of the time and place.


As a historical note, the first meeting house on the property was a log cabin, erected no later than about 1803. In about 1813 or so, another structure was built, as shown below in the only surviving image: 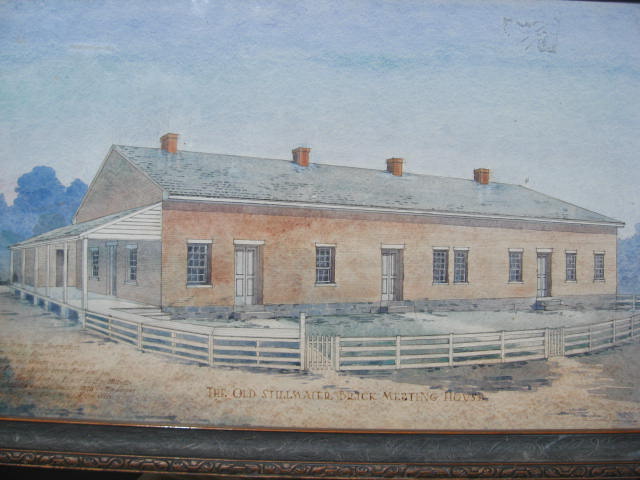 This building was destroyed in 1877 to build the current meeting house on the same property. The posts supporting the porch (left, above), were transferred to the new meeting house porch. Note that there are no steps to the porch outside the fence. Friends arriving at the meeting house drove their wagons and buggies directly to the edge of the porch and stepped across.  The outside of the posts are still scarred and grooved from the buggy wheels.The old benches from this structure were transferred into the upper gallery of the new meeting house, and are still there today.  Generations of bored Quaker children with jack knives have left their names, dates, and social commentary all over the backs and seats of these 200-year-old benches.

Aaron Frame was member of Ohio Yearly Meeting whose lifetime spanned most of the 19th century, when American Quakerism went through its most significant changes in 200 years.  The handwritten diaries are being transcribed by Martha Giffen, a recorded minister of Stillwater Monthly Meeting.  Aaron Frame was an elder in that same meeting well over 100 years ago, and as a carpenter was involved in the construction of the meeting house itself. Aaron's journals provide a rare opportunity to hear a 19th century Wilburite Friend speak for himself, unedited and without spin.  Read him for yourself at the website of the Stratton House Inn, in Flushing, Ohio, USA.

Mary Smith Davis was a long time resident of Belmont County, Ohio, USA.  As a 19th century Wilburite Friend, her religious affiliation was with Ohio Yearly Meeting.  At the age of 72 she wrote a brief account of her life as a Friend in Ohio, which has been posted online by Marie Bundy of today's Ohio Yearly Meeting.  Read her account on the website of the Stratton House Inn of Flushing, Ohio, USA.  Flushing was itself one of the villages that Mary Davis lived in during her 90 years as an Ohio Friend.